13 Awesome Resources That Will Change Your Work Life

In 2018 brands are well an truly part of social media, but what makes one business more successful than another?

And how can you get in on the action? Sometimes it feels like you just need one good idea to get you going, but just coming up with these light bulb moments is not always that easy.

Here are 5 brands that are using social media in cool and interesting ways to help give you some inspiration.

This is number 1 because if you donâ€™t already know about it Iâ€™m sure you will very soon. Red Bull are using social media to build their media empire at an alarming rate. Red Bull TV is the quickest growing media arm of the company and features their sponsored athletes, pro sports teams, music and more. (There is something on their channel later called â€œMongolian Eagle Hunterâ€, whoâ€™s not clicking on that?). Red Bull is using Facebook and other social media platforms to entice people to their website by streaming initial events/episodes on Facebook, with the following entries posted on their own platform. Additionally, if youâ€™re one of their 48,000,000 followers youâ€™re going to get a notification each time they go live- that’s a lot of notifications and a lot of screen time being generated.Â

If you want an example of how to push a new service to your already dedicated fan base this is the pick of the bunch. Expect Red Bull TV to be entering your life in some way very soon.Â

If youâ€™re having trouble finding a style or tone on social media that works for your business, check out Wendyâ€™s accounts, as this is one company that has definitely found theirs! While we are not suggesting you follow their style exactly, itâ€™s a great example of how humanising of a brandâ€™s Twitter account can pay off big time.Â

Wendyâ€™s Twitter account is that sassy friend that always makes you laugh, not afraid to flame anyone that steps up for the challenge. This has resulted in some amazing verbal fencing matches and brought Wendyâ€™s a horde of loyal followers just waiting to see who the account will take on next.Â 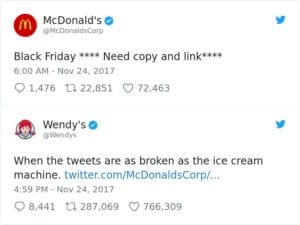 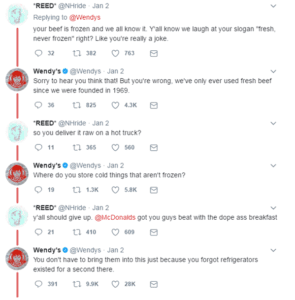 Barbie has copped a lot of flack in previous years on a number of feminist issues ranging from creating an unrealistic body expectation for women to not creating dolls with that accurately reflect women in the work place. What people can learn from this company is how to take criticism on board and grow from it. Barbie has recently launching their Dream Gap Project, an initiative to help young girls believe they can do anything, as well as creating more dolls with professional clothing, such as the camera crew and reporter Barbie. The company has listened to their critics and turned Barbieâ€™s weaknesses into a strength.Â 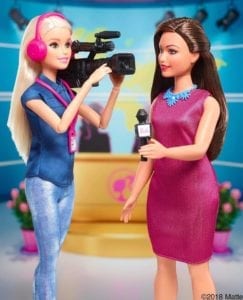 GEâ€™s net revenue in 2017 was US$122.09 bil; the company is massive. It’s a factor that can make the company feel like an emotionless juggernaut to consumers. Because of this, it was a stroke of genius by their marketing team to defy this stereotype and instead focus their recent YouTube and social media campaign on one single employee at a time. The videos are only about 3 minutes long but are heartwarming and personal, making the viewer smile. Big companies should follow GEâ€™s lead and marketing angle, it shows that the people make the company, and if their people matter, it makes you, as a customer, feel like you matter too.Â

Stranger Things was a show pretty much everyone watched. Throughout the first season Eleven tore through several boxes of Eggo frozen waffles much to the bemusement of the other characters. When season two rolled around Eggo decided to capitalise on this, teaming up with Netflix and the show, to bring fans waffle recipes, hints about the show, and re-Tweeting people who mentioned Eggo and the show.Â

This is a perfect example of how to capitalise on a positive situation. Eggo probably never imagined that this would occur when the show first came out, yet they saw an opportunity in the characterâ€™s obsession with the product, and their efforts to springboard off this have payed off big time.

So, have you got some great examples of brands using social media in a great way? Let us know on social media, and if you want to check out more about what brands are doing click here. 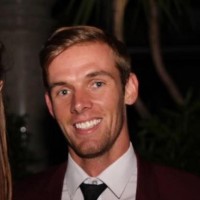 Owen Johnstone
View More Posts
I am a public relations and marketing professional who has a love for all things sport. When it comes to social media I am all about video, it's quick, vibrant and completely unique every time. Currently I am an Intern at #SMPerth and a marketing assistant at Peel Thunder Football Club. If you're looking for a early tip for the Super Bowl, a safe bet is LA Rams. You'll thank me later.