I don’t normally get attached to things. Especially virtual, non tangible things. But when you’ve accumulated things over the course of a few years, it’s kinda sad to have those intangibles being taken away from you…

Back in 2009 I’ve joined Foursquare. I didn’t really know what it was, or what to do with it, but I was very excited to check into places, and get acknowledged for amassing “check-ins” by getting those silly badges. It was the “surprise and delight” effect that worked wonders on me. Don’t know why, but it was getting addictive, and helped me persevered for as long as I have…

Today I’ve checked in for the 5,001st time. It’s sort of a mile stone, even though I didn’t really aim at anything in particular when I first joined. I never tried to “game the system”, gain as many checkins as I can, checkin in multiple places at once, just because I was “in the area”. For me, I used the app to keep track of places I’ve been, things I’ve done, in my city (Sydney) and around the world. It was, and still is fun for me.

Ok, so maybe I was a bit competitive in quest for certain Mayorships, when I worked with KINSHIP digital, and had almost daily battles with @michae1green. That was a bit of fun, competing on the mayorship of the office with the company’s CEO I’ve used Foursquare to get special discounts, from branches who didn’t even know head office had held a competition, until they saw the “Special” on my phone in my recent check in… That was fun too!!

At the time, I had a good understanding of what value the app provided – fun, useful information about local businesses and activities, some game elements, and some perks. It was all good!

But about a year ago, Foursquare introduced Swarm, and I got confused… As a digital and social media consultant, I embrace change! I like when things get better, and I don’t really mind when they occasionally break, because I know that something better is about to come. However, that Swarm app really puzzled me, and still does today:

I just hope one day those two apps (Foursquare and Swarm) will merge together, and provide a better experience to the user. I believe many of the 45 Million users worldwide who would wish for the same…

Many startups and technology companies will start off on a certain route, and then will go to a different direction. Some more noticeably then others. Pivoting is perfectly acceptable, and change is obviously welcome.

I’m sure one day soon I’ll be losing those silly badges I’ve collected over the years. So here – I’ve added them for safekeeping… Videos We Love: Keep Calm Your Internet’s On

We've all be in this situation before: your internet goes down, and there's no sign of it coming back on anytime soon. 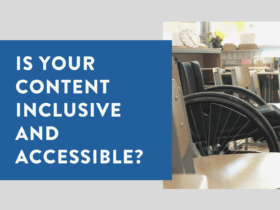 Inclusive content today, with more than one billion people with disabilities/impairments, is more important than ever before.